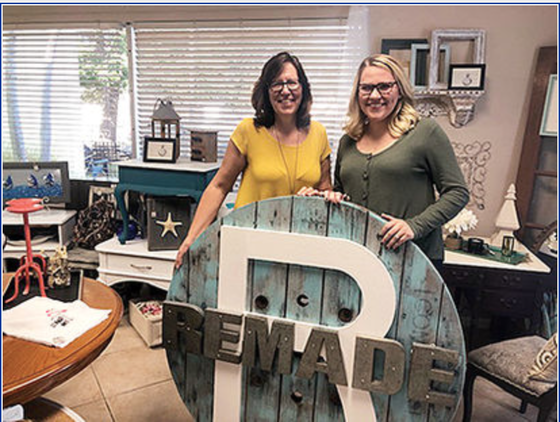 It's part real life Pinterest board, small business education center, somewhat of a consignment shop and a place for positive vibes and empowerment.

Eventually, Luciano and Van Eck want to have a workroom for bigger projects.

The store's back room was also recently made into a classroom.

"We have ideas for lots of classes," Luciano said. "And we have the freedom to do whatever we imagine."

Prices depend on the type of class, its skill level and how long it lasts.

Re:MADE has items made from everything from old leather jackets to necklaces made out of scrabble pieces.

Its mission and vision is "doing life better together."

"When someone has purpose, it's almost tangible," Luciano said.

And she sees it on a daily basis.
​
Re:MADE offers neighbors, artists and volunteers a retail location to work together to remake donated items and create repurposed household items and furniture to sell at affordable prices. This saves items that would usually be sent to the landfill.

They get repurposed, resold and re:MADE.

Everything is repurposed or it's been used, Van Eck said.

"We're just trying to get into that green mentality."

Cape Coral re:MADE, which opened in April and will have a grand opening in season, hopes to collaborate with nonprofits, community organizations and businesses to bring work groups and volunteers together, as well as gather resources.

"Our vision is to create an incubator for people wanting to start a small retail business," Luciano said. "To provide training and support for people who have barriers to employment. To collaborate with other non-profits, providing them with our excess donated goods."
One of the store's goals is to help empower people to achieve their dreams through positive life changes, educating and walking alongside each other uniquely through relationships, restoring confidence, building support systems and helping people find and grow their talents and skills.

"I think in the society we live in now, people are so separated," Van Eck said. "Maybe they don't have family. They don't have the support around anywhere. They're just doing life by themselves. As they come in and as they feel comfortable in the environment, they open up. We can speak life into them and encourage them and be their cheerleader."

Luciano remembers a customer who came in because she saw an item listed on Facebook Marketplace.

"She was just blown away and she had not done creative things," Luciano said. "She had just moved down here and was focusing on her business. She saw all of our stuff and she got so inspired and she bought furniture and paint and has done this storm of creativity."
Luciano says the response from the community so far has been really positive.

As re:MADE continues to grow, they want to help other nonprofits, whether that's sharing materials or sharing their space.
"What better way to impact the community," Luciano said. "Then to help other people who are helping the community."

So far, Cape re:MADE has been talking to Habitat for Humanity in North Fort Myers and New Beginnings in Cape Coral.
Prices at Cape Coral re:MADE range from $2.50 and up for home decor. Furniture is in a higher price bracket.

But, Luciano and Van Eck try to keep their prices reasonable and fair.

"We want to make sure everyone can have beautiful stuff," Luciano said.

You can find everything from stools repurposed into shelves, unique end tables, candle holders, home dcor and organizational items, wreaths and furniture.

New items are always coming in, too. Luciano likes to see what sells and becomes popular.
"It's fun," she said. "It's really fun -- just to see the process of creativity."

Van Eck said it's also about thinking about things in a different way.

"We get a lot of support from Anchorage (the flagship store), but if I see something I like I might just think, 'OK, how can I tweak that? How can I incorporate that into something else, whether it's a design or a style.'"

These chalk mineral paints have adhesive qualities, so there is no need to sand, prime or prep. There are 60 color choices and the finished product will have a matte finish. Cape re:MADE offers classes in these products as well.

Luciano was a hairstylist before she opened Cape Coral re:MADE.

"It's really interesting painting furniture instead of hair," she said and laughed. "But I love the ability to connect with people here in a different way."

Van Eck's mom owned a bridal and flower business while she was growing up and she learned how to make corsages and decorate wedding cakes.

Van Eck also has ties to the re:MADE flagship store in Alaska. Both her mother and her sister are involved.

"Three years ago I said it would be fun to be creative and do what my sister does," Van Eck said.

Five years ago, Luciano knew she was supposed to open some kind of store, but she didn't know what.

"That's what the Lord said, but he didn't reveal much to me," she explained.
Three years went by and Luciano started to consider the idea.
She also has a friend who inspired her.
Her friend had to work full-time while her child was sick.
"And that just tears me up," Luciano said.

So, she wanted to create a space that would facilitate the option for people to be able to stay at home with their kids.
"And still create some income by creating and selling things," Van Eck said.